Learn Arabic Online.
Boost Your Career in the Gulf.


What is Gulf Arabic?

It is the mother tongue of Gulf Arabs and a prestige dialect. It is used in day-to-day interactions, in business, in TV/radio talk shows, movies and music.

GulfArabic.com is the #1 Gulf Arabic comprehensive e-learning course. You get loads of everyday and business-related vocabulary and all the grammar you need to start expressing your thoughts by forming your own sentences. There's audio for every Arabic word or sentence, as well as quizzes to test your knowledge.

Throughout the years, GulfArabic.com has been mentioned, discussed and recommended by a variety of media outlets as well as university professors.

We take pride in having among our numerous clients such notable examples as Standard Chartered Bank UAE and a renowned CNN presenter, as well as having contributed to the production of this amazing video about Dubai.

Modern Standard Arabic (MSA in short, or fuS-Ha فصحى in Arabic) is the language of news journalism (not so much talk shows which are usually in a dialect), colleges, diplomacy - it's a high-level variant of Arabic, which is to a very large degree different from the spoken language both in grammar and vocabulary. If you're interested in that, we cannot help you - there are a gazillion sites teaching that.

If you're interested in reading the Holy Qur'an, jaza'ak Allah khayr, may Allah reward your efforts, but we cannot help you. It's not what we specialize in. 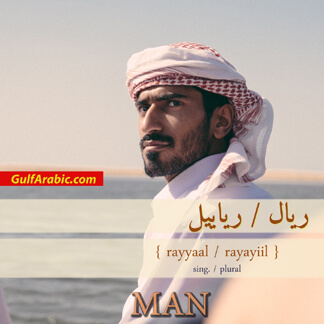 The mother tongue of Arabs is a dialect. For Egyptians, it's Egyptian Arabic (Masri), for Syrians it's Shami (Syrian, or Levantine) Arabic. For Gulf Arabs it's Gulf Arabic (Khaleeji Arabic). That's the language of everyday life, of most business, of radio and TV talk shows and series, and as you can >> see here << it's used at Government Summits as well.

It depends on your needs.

Are you interested in high-level political negotiations, watching the news, and history dramas, etc.? Then you need Modern Standard Arabic.

Do you want to actually talk to your colleagues, perhaps make a few friends, basically talk to people in everyday layman's terms? Then you need Gulf Arabic.

As you might imagine we receive many emails. Some of them are from people who by the way they wrote their emails, you could be sure, they still think you can go out on the street and use Modern Standard Arabic (MSA) conversationally.

You could try that and, yes, in all likelihood, people will understand you but you may not understand them since few Arabs speak like that (like the TV news announcer, like a high-ranking Arab League official, like a documentary narrator). Most people will be polite and outwardly impressed by your knowledge of MSA; some might ask you 'Why do you speak like the TV?'

Arab people speak, in 90% (if not more) of their waking lives, their mother tongues, and those are the dialects (lahjaat لهجات ). Since you ended up on our site, you must be either in the Gulf or planning to move to the Gulf or maybe you have Gulf Arab friends. To use a quote attributed to Nelson Mandela:

Setting out to learn Arabic as spoken in the Gulf countries, may evoke memories of past attempts at learning a foreign language, be it in high school or college, with all the ensuing tedious memorization of words, and phrases, and grammar rules. This coupled with the notion that Arabic is a very difficult language won't do you any good in your progress with this beginners' course. For many, it appears that the results of studying a foreign language are not worth all the effort, and they soon abandon their dream of becoming more proficient.

It is very important to know how to go about studying a language, especially one that is quite different from English (or any other European language), such as Arabic. Every student has a different way of learning just as different professors have different ways of teaching. Nevertheless, there are a few rules of thumb one has to keep in mind when setting out to learn Arabic:

Create a routine. Spend some time on this course at a set hour of the day.

You shouldn't worry too much about making mistakes. Just accept that the goal of learning Arabic includes making mistakes. The ones who never make mistakes, never try to do anything, and that in itself is quite a mistake. It's normal to make mistakes while you are practicing your growing knowledge of the language. Have in mind that most Arabs will be very pleased with your attempts to speak their language.

It is of added benefit to you if read up on the Arab people, the Arab culture and history. The more you get to know the culture, the more your interest will be aroused and the more motivation you will have to proceed with the Gulf Arabic course.

It is better to study for brief periods of time and more frequently than for long and not often. Persistence pays off.

Studying lists of words and phrases is usually not the most favorite language activity. However, there is no learning without memorization. You have to learn those words by heart. There is a wonderful method you can employ in order to facilitate the memorization process. For every new spoken Arabic phrase that you want to learn think of a ridiculous image that would make you recall the phrases. The trick is to always think of funny images to help you learn. Emotions will help you more than pure logic.